It’s been years since I smoked a Fortuna but the old Tabacalera building in Santander does hold a special place in my heart. It’s been one of my favourites since I first caught a glimpse of it rowing on the bay. When I realised it was designed by the same architect who did the petrol station (now a café) beside the Centre Botin I loved it even more. I’ve had a few occasions to enjoy its splendour recently so I thought I’d write about it now. There’s been talk of the building getting a new lease of life as a civic centre which may come to nothing. But it does seem a crime to be used as a storage facility.

You can see the two complimentary structures are very close to the water’s edge. It is surrounded by other buildings now but the site wasn’t so cluttered back in the early 1960s when it was built. Now it’s nestled in between Port Authority warehousing and residential towers.

With origins dating back to 1636, the Spanish tobacco manufacturer Tabacalera, is associated with three sites in Santander. In 1835 cigarette production commenced at the site of a former convent on Calle Alta (opposite the Regional Parliament) which is now assigned for a social housing project. And in 1900, a new facility was built which now houses the City Library & Archive. But I’m most fond of the office block and tobacco drying and storage facility that was designed in 1958 and in use for some 40 or so years.

Tabacalera vacated the building in 2002 when it moved its operations 25km outside the city. By then, then company had been privatised (1998), merged with a French company to form Altadis (1999) and would go on to be acquired by Imperial Tobacco in 2008. The Bristol-based tobacco producer continues to employ 261 people in its plant in Entrambaguas under the Altadis name but I’m more interested here in what’s happening to its final stronghold in the city. 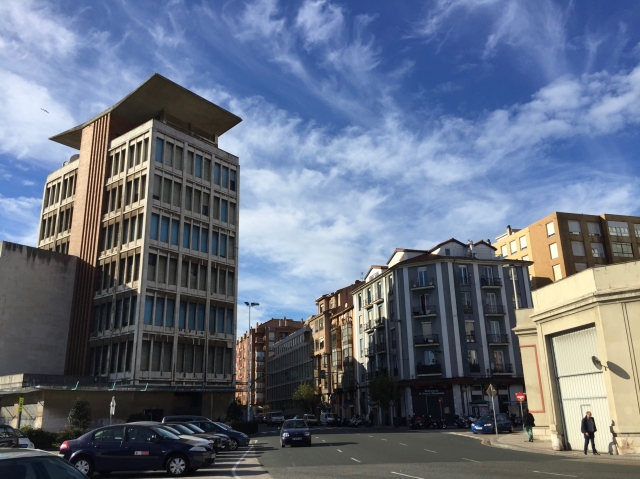 How great is that roof?

After it was vacated by Tabacalera, the city’s College of Architects became concerned about the 8,500 metres squared structure. In 2007, they requested that the Town Hall list the building to protect its future. For a brief period in 2009, it looked like the building might become the new HQ for the Port Authority but it wasn’t to be. All was quiet until May this year, when Santander’s mayor suggested that the building could be used as a civic centre adding that the police commission might also be interested in moving from their current location on the Calle Castilla. Cue a few articles and countless online comments about vanity projects and whether the space would or wouldn’t make a great police station or civic centre. In the meantime, it continues to be used by the neighbouring Customs for storage which to me seems like such a pity. Before I get into what it could be used for, let’s look at who designed it and why it’s worth preserving. 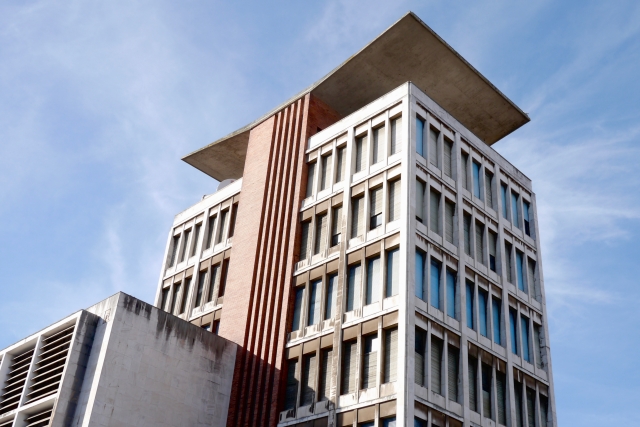 From the street, the roof terrace is completely invisible offering complete privacy…

You can see the great industrial lines of the tobacco drying facility – the design was to let air in but keep the sunlight out. Have a look at the lovely clipped roof of the tower in shot also

The building is the handiwork of Juan Jose Resines del Castillo (1904-1979). He was city architect in 1954 and 1955 and worked on a number of re-construction projects for the city following the 1941 fire. But he is best known for the Perez del Molino building on Calle Juan de Herrera from 1947 and the 1960s Campsa petrol station by Pereda Gardens which is now a cafe inside the Botin Centre which you can see here. (If you want to see something outside the city, check out this 1956 daycare project in Santona for the children of those who worked in anchovy sector). His designs are both iconic and very much of their time. The Tabacalera building under the spotlight here was designed in 1958.

Within a plot of just over 2,000 metres squared, Resines created a pentagonal structure with a chamfer (or little chunk) on one side. He opted for two recognisably separate volumes of differing heights. An elongated four-storey section for storing tobacco and narrow seven-storey section for offices and separate living quarters for the manager and the building’s concierge.

You can see how well it looked in its early days on the CDIS website here where you’ll see the location was much quieter in the 1960s. Now its surrounded by busier roads and taller residential blocks. You’ll find Ricardo Lorenzo’s 1971 passenger ferry terminal and his Pasionista’s church with a block or two. Resines worked with Lorenzo on a number of projects so it’s rather nice to see their buildings stand side by side.

The structure has not been changed since the building was designed so you can imagine why it’s so interesting to fans of this period of architecture. The Docomomo website features this building and has nothing but praise for its use of brick and glass. It also highlights the wing-like layer of roof that seems to float above the main tower structure. Thanks to friends in useful places, I’ve been handed a copy of the Docomomo report on the building which identifies the building’s style as Rationalist which was emerging at this time. The country was tiring of the Classicist style that had been used in much of the restoration work after the Civil War. Influences cited include the International Style which can be seen in the ‘function over form’ approach and the absence of ornamentation. The report also finds traces of the ‘beaux-arts‘ movement citing to the placing of the tower at the edge of the site, the tripartite layout of the facade and the shared plinth or ‘zocalo’ as evidence of this. The harmony and practicality of the combined industrial and administrative volumes is highly praised in the Docomomo report. And I can see what they mean. Although both serve very different functions, the two structures do seem to hum together nicely.

This late 1950s gem still manages to look modern and contemporary – albeit it a bit empty. And I do love the brick and cement combo – both materials being practical for the financial situation in which Spain found itself

You can see the building’s east facing facade here, the cranes on the left are in the industrial port. The busy road to the right brings the traffic in from the everywhere between here and Bilbao

Why It Needs to be Restored

Even to lay people such as myself, it’s obvious that this is a little gem of a building. Its unique design means that it can be seen from many points throughout the city although it never sticks out. Santander is quite a densely populated city and it does have a lot of high-rises. Whenever I catch a glimpse of the Tabacalera, I’m reminded of how outward looking its architect was at a time when Spain was on its knees.

When the 54-year old Resines was adding the final touches to his design for Tabacalera in Santander, Spain was in a time of great change. After two decades in isolation, Franco was embarking on an opening up of the Spanish economy. He began by injecting some neo-liberalism into his cabinet in 1957. In 1958, when Resines was signing his name to the building plans, Franco was signing Spain up to the OEEC (now the OECD). When Spain joined the IMF in 1959, Franco (with the backing of the World Bank) signed off on a major Stabilisation Plan to contain Spain’s inflation, liberalise foreign trade and encourage foreign investment. Am I pushing it to suggest that the design of the Tabacalera building reflects the opening up of Spain to the world of trade in the late 1950s?

If Santander was coming down with buildings such as this one, I’d be the first one to say it could go but that’s not the case. But what possible purpose could this building serve in the 21st century? I haven’t actually been inside but it’s safe to imagine that the lower volume is quite dark which could represent a challenge for any refit but the tower is not only bright but the views must be amazing.

When I read about the mayor’s idea of a police station here, I was surprised. Gotham City came to mind but of course that was more art deco in its styling and came about two decades earlier. Perhaps the lower volume which is darker could be useful for a few holding cells but even still it seems a bit macabre. I’m happier with the idea of a community centre probably because it would allow nosey parkers such as myself to gain access to the building (without getting arrested!). The town hall, with the support of the Botin Foundation, has done a decent refurb of the Telefonica building at Numancia so there is a good precedent there. I really like the brilliant but very subtle mural on the outside which is awfully hard to photograph so you’ll have to take my word for it. 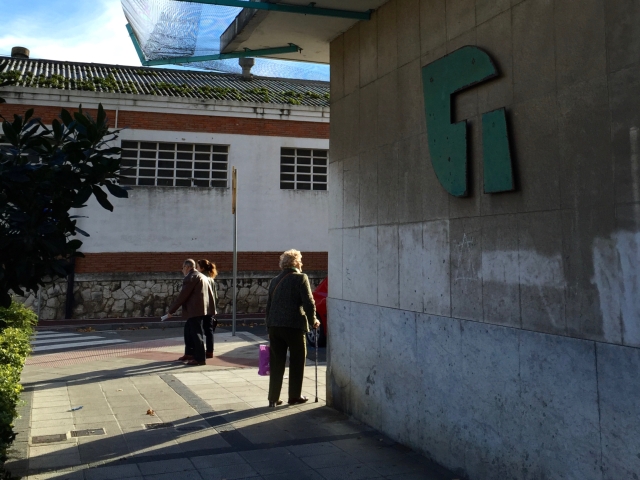 If I Were Mayor

In a city that depends on tourism, the most obvious solution would be to make it into a hotel. The views of the bay lend themselves to tourism but it is true that the immediate neighbourhood is a mix of commercial and residential properties with heavy traffic to the rear that might be off putting to some. But I don’t see why this area couldn’t enjoy a share of the pie. Santander doesn’t have a Parador – Limpias,  Santillana and Fuente De are the nearest. Could it work as a Parador? Quite possibly. Although the Parador chain tend to go for older structures but why not include something from the 20th century in its portfolio?  The Parador chain returned to profitability in 2014 after a few years in the doldrums so they are probably not seeking to acquire just yet- but if they were…

But whatever the end result, I’d like to see the space available to those interested in architecture in some capacity – including the kids of this city. The College of Architects in Santander has begun to run workshops for kids. The Botin Foundation has been providing programmes for children for years and has worked with a great group in Madrid called Chiquitectos that encourages children to explore architecture. Kids love playing with blocks and they can teach us adults a lot about having fun with form, function and structure. It’s important for them to appreciate how important great planning, building and design are to the future of Spain’s urban centres. I’d like to see this reflected in the building in some way.

The iconic roof is easy to pick out when you know what you are looking for. You can see it here at the end of the street where Ricardo Lorenzo’s Pasionistas Church can be found

You know the views have to be good with those mountains as a backdrop!

But it’s impossible to come up with ideas until I’ve seen the space from the inside (and even then!) I am desperate to get inside and can’t wait to see the views from up on top. I daydream of myself up there in its heyday – imagining some kind of Mad Men-esque scene with myself sipping on a vermouth – and yes – cigarettes – everywhere. I might try to smuggle in a hip flask and a martini glass whenever I convince somebody to let me in but I’ll be leaving the chain-smoking to somebody else!!