Sometimes you only appreciate what you’ve got when you change your surroundings. A few weeks* ago, I went to Bilbao (just one hour away – no need to change time zones) and it was there I realised I should be careful what I wish for. It was a follow-on trip from my Foodies Tour of Santander when a group of curious minds from Bilbao came to the Cantabrian capital. Well, this was the return journey and the day was jam-packed with a breakfast meet-up with a top chef, a guided tour of the Old Quarter and a visit to the Philippe Starck designed cultural centre – but my eyes were on the prize! And that was a tour of the Ribera foodmarket that has recently emerged from a massive refurbishment. 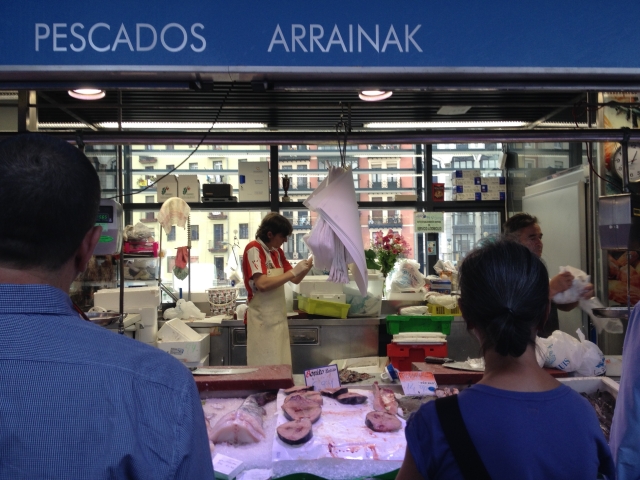 Inside Ribera market in Bilbao. Arrainak means fish in Basque. At first I thought it was the name of the fishmonger…

History of the Ribera

Located in the centre of Bilbao on the River Nervion, this is the site where boats have been unloaded and goods are bought and sold since the 14th century. Trading took place in the open until the 19th century when the stalls were covered with an iron structure. Following significant corrosion, a decision was taken to knock and build. The Old Plaza Mayor square was demolished to make way for the new Rationalist building with Art-deco features designed by Pedro Ispizua in 1929. Unfortunately, beach sand was used for the concrete rather than construction standard variety and the building was further compromised during the heavy flooding of 1983. In 2009, it was time for the hard hats to hit the site again. The market was completely gutted and re-built which you can see in this video. Every effort was made to accommodate the traders throughout the process and somehow or other by the time the market re-opened in December 2012, not one single day of trading had been lost.

As you can see in this stunning timelapse above, today’s market looks more like a transatlantic liner than ever before. I was desperate to see the inside and was thrilled that we were getting a walkabout by the President of the Traders Association, Begona Urabayen, who had been on the Santander tour with us. 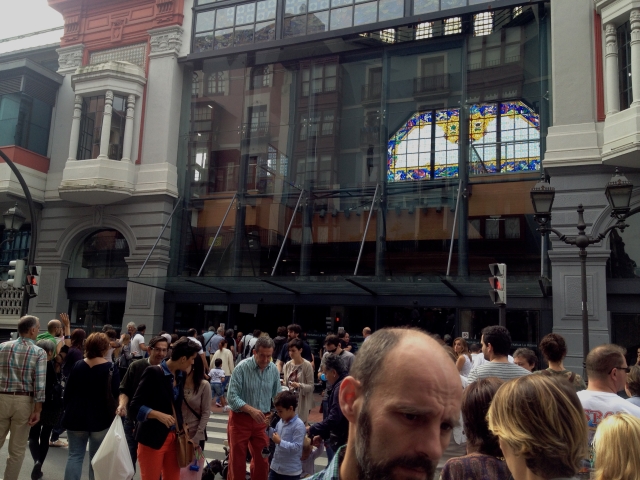 Outside the Ribera market in Bilbao. Measuring 10,000 sq metres, it was named the biggest market by the Guinness Book of Records in 1990. You’ll find 60 or so stalls operating here… 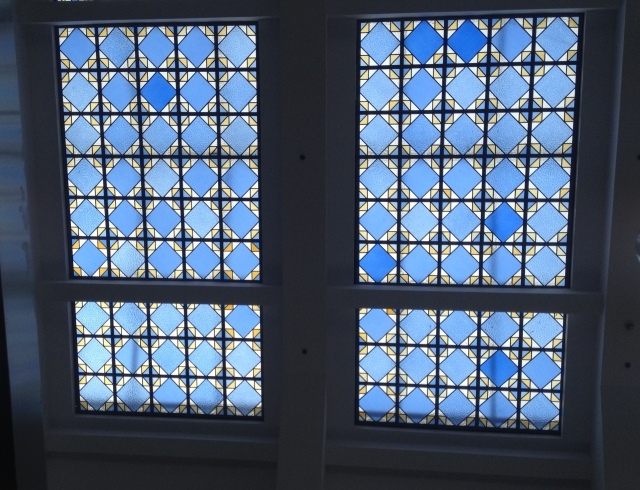 One of the many stained glass panels…

Loving the curves. I wasn’t expecting so much space… 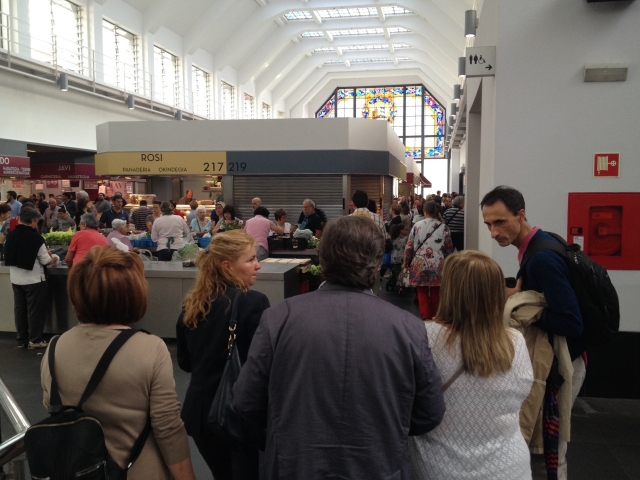 Meeting Begona was the highlight of the morning. I’m such a fan of markets and how they evolve. I’m always very cautious of change when it comes to these spaces – I’ve seen what’s happened to Spitalfields in East London when it became overly corporate. I’m waiting to see the results at Smithfield Market in Dublin which is transitioning from wholesale to half trade half consumer. I’m not against change – I love what’s happening at Limerick’s Milk Market. And I was pretty sure I was going to love the Ribera… 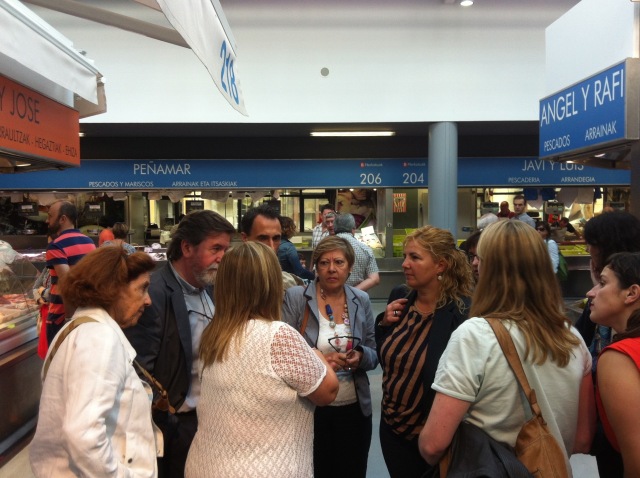 Getting down to it in the Ribera Market. Begona tells us how the market works

Try as I might, although I found the building truly beautiful, the actual marketplace felt very small and quite corporate. Maybe I’m used to Santander’s Esperanza market where the traders are working ‘codo a codo’ or elbow to elbow; where each place has its own signs and its own look and feel. I’m normally not one for such strong feelings but it felt like the soul had been taken out of the old market while the work was being done and it hasn’t yet found somewhere to settle in properly in the new space. I was glad to hear I wasn’t the only one thinking along these lines. My brother Conor (yes – he was still here!) was full of questions about the level of the consultation regarding the design and layout with the stallowners. The Vice-President of the Traders Association in Santander’s market, Marta Gomez, had lots of questions about the refurbishment as did architect Domingo de la Lastra also. Ascen and Begona answered all our questions and spoke about the challenges (good and bad) in the new market.

Where the Ribera Excels

Looking at the positives, the Ribera market is extremely bright and airy. Accessibility is excellent – not only does it have modern lifts and escalators but the abundance of space in between stalls makes it very easy for anybody with a stick, chair or buggy. And I love the central section where local farmers (caserios) can sell their products direct. It’s not just the building that’s modern – the outlook is also very forward-thinking. You can see that in its online ordering system and the fabulous home delivery service which really works – the traders pay a monthly sum that goes toward the salary of a person who handles the orders coming in and the deliveries going out. Everyone here seems to be clever with social media and showcase their produce brilliantly online.

I suppose I hadn’t really realised how lucky we are in Santander to have a foodmarket that is largely unchanged since it opened in 1904. I love that sense of continuity inside the Mercado de la Esperanza. And whilst I like the bright and airy Ribera market, there is something enchanting about the darkness of the market in Santander – sometimes it feels almost theatrical. Whilst I can see the commercial and visual benefits of mixing up the stalls as has occurred in Bilbao, I actually love the way the stalls are organised by produce in Santander (with all the fish downstairs and the meat, veg and dairy upstairs). In Bilbao, I really wasn’t sensing the personality of the people or the stalls – I like the individual nature of each counter in Santander and I realised that I actually appreciate the hand-written prices and rough and ready look and feel.

When I returned to Santander, I read a great blogpost by Kate Turner about some of Madrid’s markets offering style over substance. It was great to read what I had already been thinking – that markets don’t need to be shiny new  – in fact – it helps when they aren’t. What they do need are the tools to reach out to modern day shoppers – whether that’s events to draw people in, regular campaigns on social media to remind people of any offers or promotions, and an online app or website or a physical person to handle orders and home deliveries. I hope the market traders in Santander do travel to Bilbao in 2015 and vice-versa because each side has much to learn from the other. I could have stayed all day but it was time to leave…

I always hate leaving foodmarkets and this was no different…

The Rest of the Day?

It was time for food and in the interests of speed (our chat in the market had seriously eaten into the pintxo time) I snaffled up my tapas and white wines. This is what happened afterwards…

Domingo working on a watercolour – now that’s how you document a day out!

A few of us decided some coffee and cake was in order. Here’s Marta anticipating the sugar-rush! 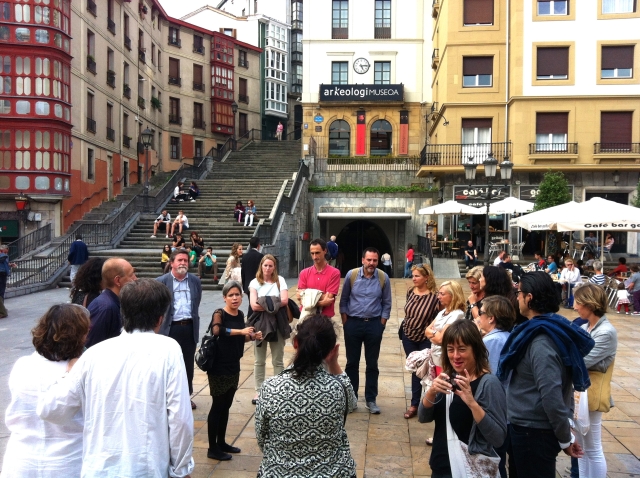 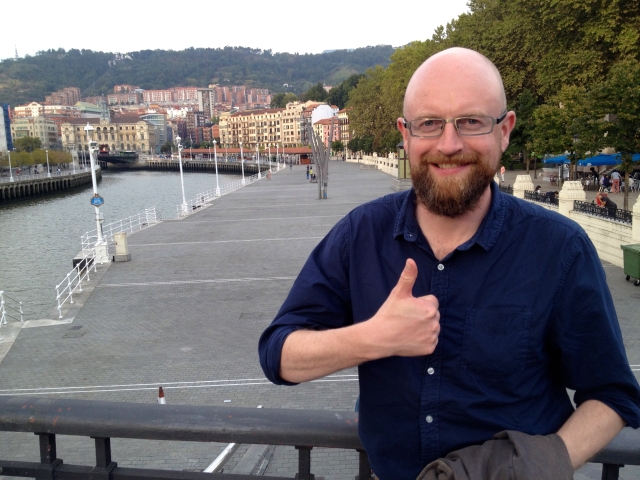 My brother giving a thumbs up to the wide pathways alongside the River Nervion in Bilbao. He’d like the same in Dublin by the Liffey 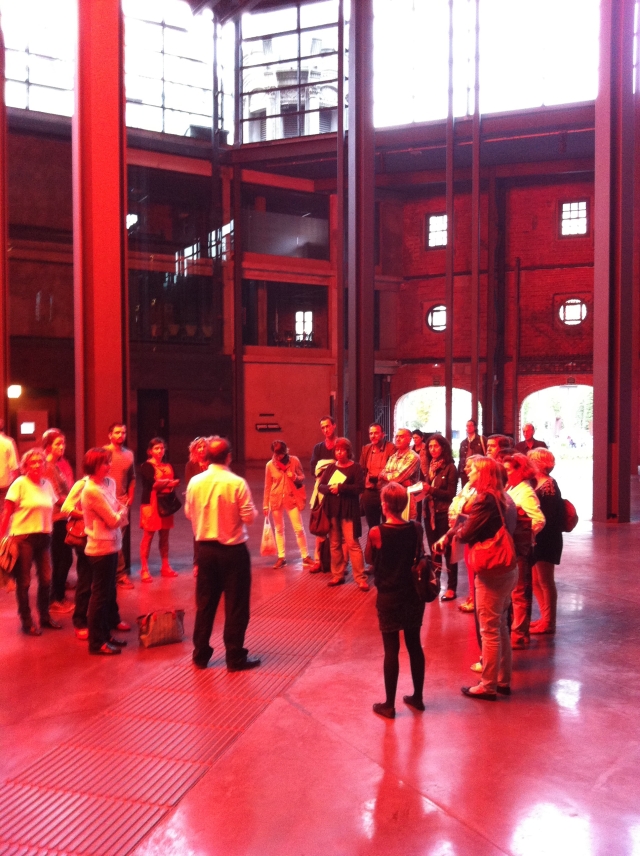 Inside it’s all very funky – the lights change colour constantly. This culture and leisure centre is another interesting space that throws up the same questions as the refurbished market does. There’a a fantastic exhibition space below where we saw El Contrato which is running until Jan 11 and is well worth a visit.

Enjoying the brilliant Shopa Alhondiga. Yours truly is here with co-founder Natalia, a Santanderina in the Basque Country. Natalia and the guys at Shopa in Bilbao organised the Bilbao Santander Sin Cocina twinning along with Librerias Gil in Santander

Some fulls and empties from the Doniene Gorrondona Txacoli wine-tasting organised by Shopa inside the Alhondiga building. The tuna and anchovies were pretty tasty too! 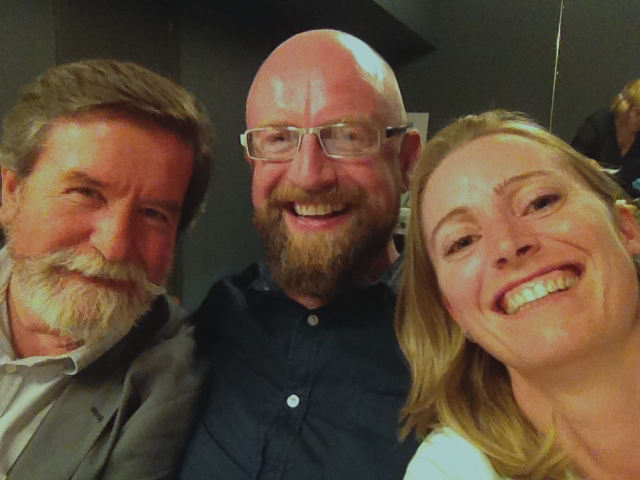 Well, it had to be done, didn’t it? A selfie of Clemente, my brother Conor and myself before we had to run for the bus back to Santander

What a brilliant day! If you’d like to know more about this foodie exchange programme, see Bilbao Santander Sin Cocina or get in touch with Libreria Gil or Shopa Alhondiga. I should advise you that the culinary theme will run into my next blogpost. When we were saying our good-byes in Santander, Marta asked my brother whether he’d be interested in visiting the wholesale fish market in Santander. He said ‘yes’ and I’ll be bringing you some images from Santander’s fascinating ‘lonja’ next time.

*I’ve been super-slow in publishing this. Sometimes it’s good to let events sit for a while before writing them up – and that’s what’s happened here.

What you think about the foodmarkets in Spain? Is anybody else out there as fond of this combo of architecture, food and history as I am?