The 1941 fire in Santander and its aftermath

I love the beaches, the art-deco buildings and the whole of Puertochico in Santander but until recently I’ve struggled to understand the city centre. Most of the mediaeval city was burned in the fire of 1941 and I never really liked what was put in its place and tended to avoid the area. This has changed in the past few weeks. The town hall is pedestrianising much of what was the old area and it’s bringing life and purpose back to the centre.

The fire began late on Saturday 15 February 1941 and burned all day Sunday. The damage done by the blaze and the unfavourable weather conditions made communication to the rest of the region and country impossible until Sunday afternoon. Fire-fighting back-up eventually arrived on Sunday from Burgos at 7pm  – followed by help from other neighbouring cities and Madrid later that evening. In total 72,211 firemen battled the fire and its aftermath over 15 days. One of those firemen who came to help – Julian Sanchez from Madrid – lost his life when a building fell on top of him on Monday 17 February. Amazingly – it was the only life claimed by the fire.

Extremely strong south and south-easterly winds battered the city on the Saturday afternoon. On Paseo de Pereda, gusts knocked trees over. Roofs, chimneys and drains were damaged by the force of the wind and pretty soon the streets were filled with dangerous debris – and a number of small fires broke out in the city. But the real trouble started at Number 20 on Calle Cadiz with a short circuit.

The building at the back is Number 20 Calle Cadiz – the source of the fire started in 1941. To the left is the Banco Espana and the right is the Cathedral – which was badly damaged by the fire. Calle Cadiz was completely rebuilt

The combination of the high winds and the old dry wooden structures of the buildings on the street meant the fire spread quickly from roof to roof and building to building. The fire in the Calle Cadiz spread south towards the port and north towards the higher part of the city. The wind calmed down on Monday afternoon which is when the flames were declared under control. 14 hectares of the city had been on fire.

Media coverage
You can see 8 of El Diario Montanes'(the local newspaper) images here and 24 more here  – it’s HQ was destroyed by the fire. And here are 14 more images from photographer Alejandro Quintana of Samot opticians and photography shop, who’s building met the same fate. The fire was a national news item. Read the coverage from the national press and see a minute’s footage by the state-controlled NoDo cinema newsreels.

The ones that got away 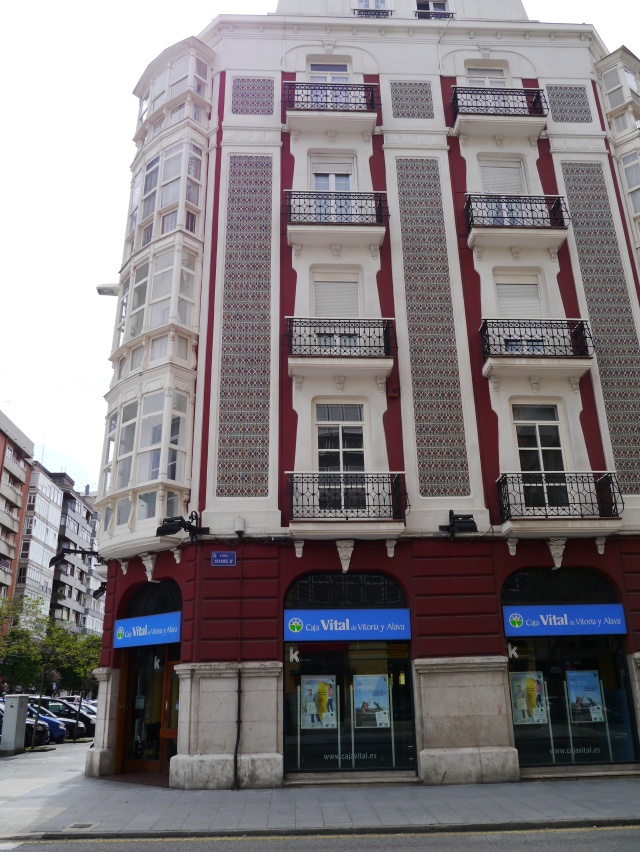 The Post Office was another one to escape. It backs onto the Cathedral which was badly damaged 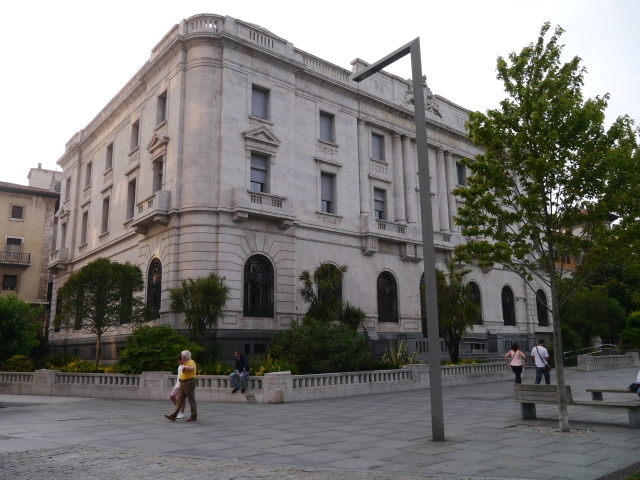 The Banco Espana was built in 1924/5. It’s structure withstood the flames.

The days after the storm

A number of decrees were issued immediately. Firstly, no fires could be lit in homes for a week afterwards – so residents ate raw food until mobile kitchens were set up. Fruit-sellers were threatened with imprisonment for inflating the price of fresh fruit and vegetables. Donations of food, clothes and blankets were sent to the city from all over Spain – many provisions arrived by the ‘Canarias’ cruise-ship into the port of Santander. Temporary commercial stalls were set up around the city to facilitate trade. Hotels were used to re-home those who had lost their homes.

In addition to plenty short-term decisions, the Town Hall and the central government had some huge planning decisions to make. What should they do with the 14 hectares of prime land in the city centre? They could (1) re-build and replicate exactly what was there prior to the fire, (2) start from scratch with a blank canvas, or (3) a bit of both. They went with the third option.

The original (upper) section of Calle Lealtad was completely rebuilt

Being new, the structure of the Finance building was strong enough to act as a fire defence point by the firemen during the blaze. It was restored and the architect would later comment that he built the building twice.

The cathedral was located beside the source of the fire on Calle Cadiz. It was re-built and restored. The surrounding area was re-modelled and expanded significantly on two sides

A dozen streets lay where this square – the Plaza de la Catedral – is now located. In fact, the rear of the Post Office (on the right) is the only pre-1941 structure in the picture

This was a time for reconstruction across Spain following the damages wrought by both sides during Civil War. But Franco saw an opportunity in these particular ruins and Santander was given special status. Franco visited Santander on 10 September 1941 and spoke about the need for action not words [One newspaper’s coverage of his trip is available in Spanish here]. In the same month – the Town Hall had a budget of 70 million pesetas to rebuild the area and within fifteen years the area was reconstructed. Franco returned to the city on five more occasions. In 1953 he inspected the completed restoration of the cathedral – you can watch a NoDo newsreel of that visit here.

His commitment to the reconstruction of the centre was probably the reason why Santander was the last city on mainland Spain to have a statue of Franco – it was only taken down in 2008. The inscription which is directly attributed to Franco was “From the fire of the city of Santander emerged a new and beautiful capital”.

Whether Franco’s motivation was political, architectural or otherwise, the changes to the centre of the city were significant and long-lasting. A longer and wider avenue was built to link Calle Burgos with the Paseo de Pereda – Avenida de Calvo Sotelo – on which large apartment blocks and commercial buildings were developed. A new grand square connecting the restored Ministry for Finance and other institutional buildings plus the regional savings bank was developed – it was called Plaza Velarde or La Porticada. Some commercial streets were restored and a number were expanded (Rualasal and Lealtad) and a few streets were created from scratch (Juan de Herrera). He did provide housing projects for those left homeless from the fire but these were all located out of town. Much of the reconstruction has come in for criticism e.g. it was done too fast, done too cheaply, designed for the middle classes, too showy etc. And much of the criticism is probably accurate.

The new Avenida Calvo Sotelo – a modern thoroughfare through the city 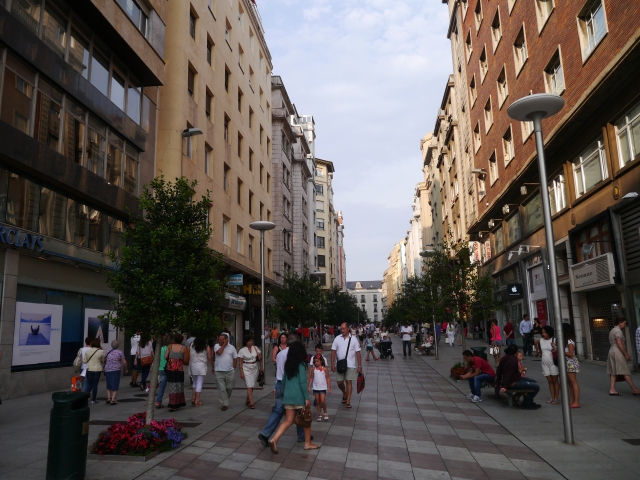 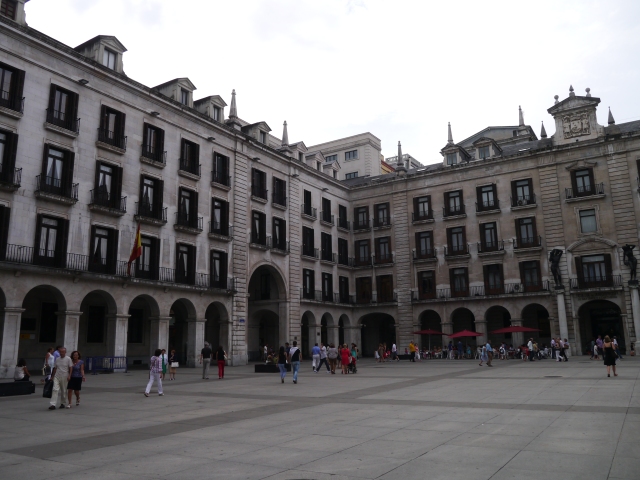 The Plaza Porticada or Plaza Velarde is a very grand square. The surrounding buildings include the HQ for the local savings bank and public administration and institutional offices

This lower section of Lealtad didn’t exist pre-1941. It has just been pedestrianised this summer which is re-creating a bit of a buzz around what used to be the mediaeval centre

This section of the city is completely different to its pre-1941 self. I like the curvy building in the middle

But putting the critics to one side – having spent a few afternoons walking around what was once the oldest part of the city, I’m beginning to enjoy and appreciate the mostly modern architecture. I certainly don’t like what these buildings were intended to project or represent. But I look around this section of the city and feel the history. And I can sometimes peel back the layers or watch two buildings side by side that look completely different and understand why the city looks the way it does. Maybe it’s a lesson to me to read more, walk more and not make quick judgements. 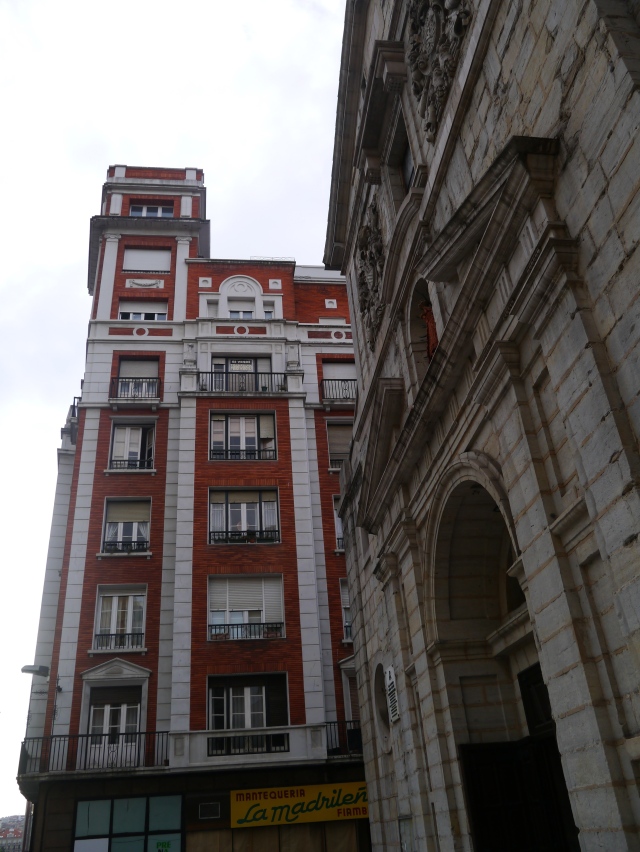 The Church of the Assumption was all that was left of the old Calle Compania. It was restored and the street rebuilt and renamed