This is the time most of us reflect on the past calendar year and I’m no exception. The big difference is this year I have hundreds of photos to jog my memory. It’s been an interesting year. I’ll remember it as the time when I started blogging, got interested in photography, bought a nice camera, got curious about architecture and went rowing. Here is my year in images…

It starts out on the iPhone. That pocket camera came along with me on my walks about Santander. Any time the sun came out, I tried to get out and find a few interesting angles around the city. And even on the darker days I took a few snaps. 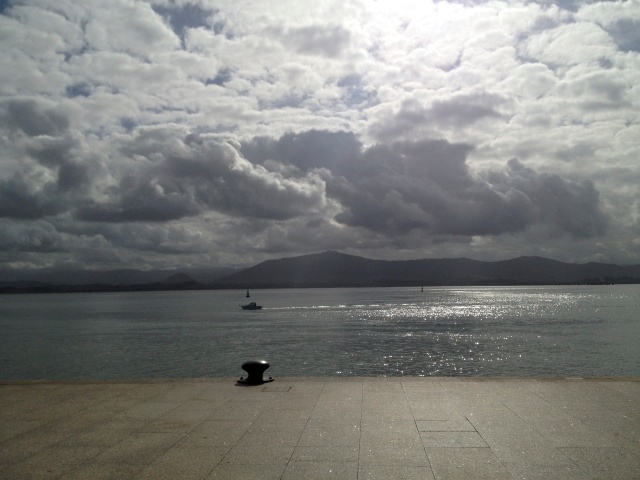 I love the shimmer of light on the water in this photo. Early visitors to this blog might remember I used the image as the masthead. I took it down when I had written enough blogposts to bulk up the front page enough

It didn’t take me long to realise that the bay held a certain attraction for me. I think I like it because it’s where the city meets nature. And I realised that it was the meeting of the two that interested me. 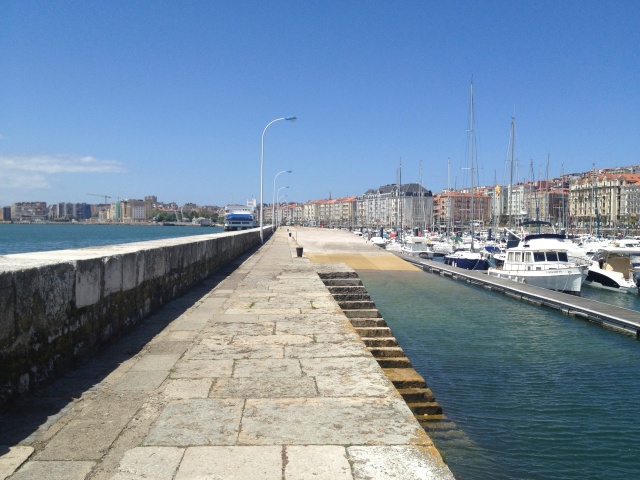 Puertochico or the ‘Little Port’ in Santander. I was happy with the angle – how the pier seems to slice the water in two 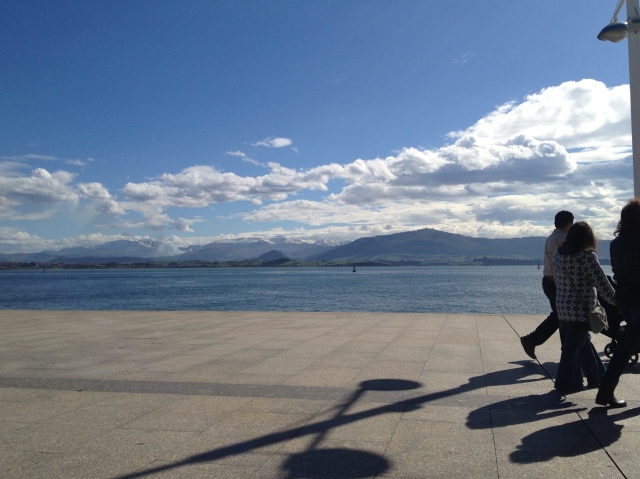 Because I look like a tourist, nobody asks any questions when I am snapping away. So when I need to get a few people in a picture to show scale and add movement, I work away without attracting any attention. This was one of the first photos that showed me how an landscape can be enriched by adding in a few people 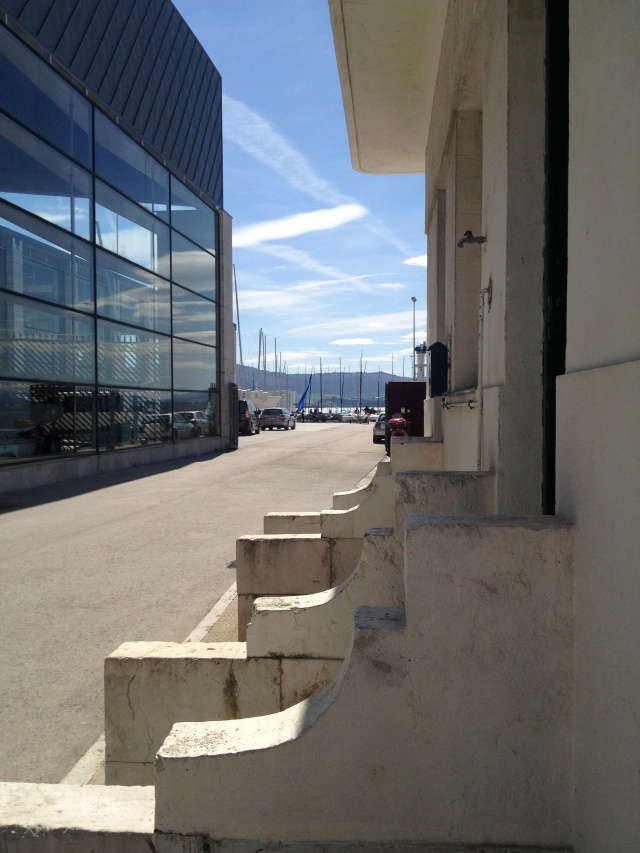 For some strange reason, I remember this photo more often than I should. I think I like it because of the contrast between the two buildings but only just noticed the zig-zagging of the cloud or the airstreams in the sky today which adds another element

In addition to having the sea and interesting skies, the mountains behind the bay make almost any picture look good. 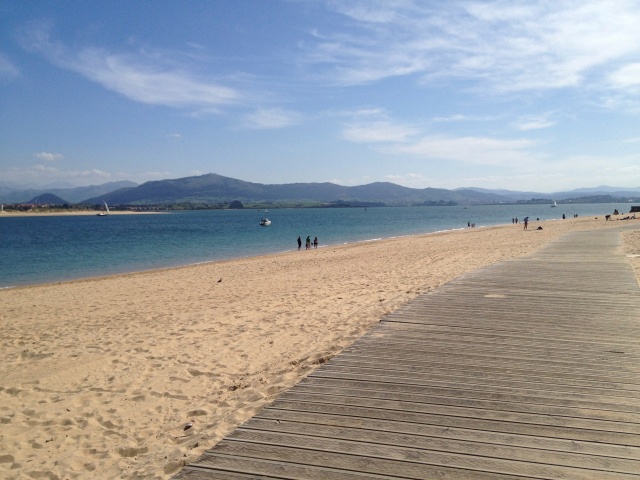 I’m fooling around with angles here on the iPhone. I like this one because of the colour contrasts between the boardwalk and sand and the blue sky and the sea. And I see the clouds help out as well by reflecting the lines created by the boardwalk 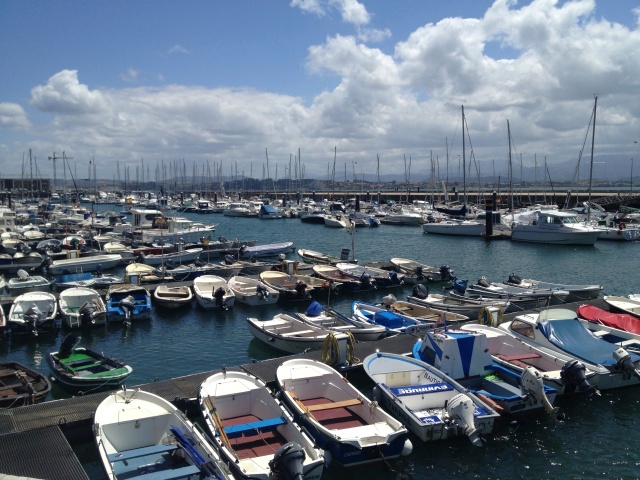 I went a bit nuts taking photos of boats in the Spring. My maternal grandfather (a painter) used to say he sold more paintings of boats to women. He reckoned the boats offered a sense of freedom or escape to the fairer sex. There’s no shortage of boats around these parts

Having convinced myself that I was actually interested in taking photos, in June I decided to invest in a decent camera. The city’s new art centre was begging to be photographed on a regular basis. Me and my Lumix latched on the Botin Centre project like a newborn cub to its mother. 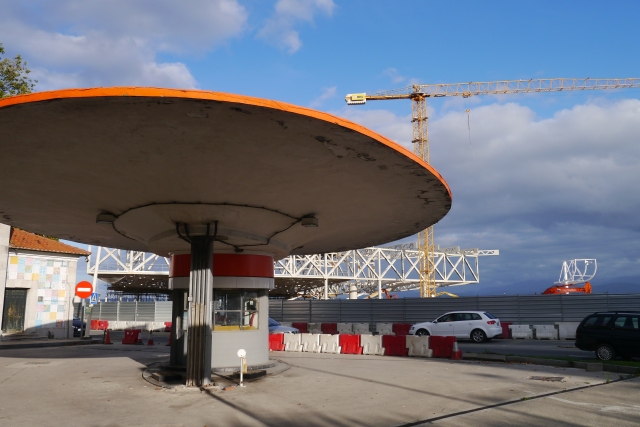 You’ve got to love digital photography. I took this photo presuming the petrol station was going to be knocked down. I was thrilled to read later that evening that it was to be turned into a cafe! The little building to the left wasn’t so lucky. It was knocked yesterday

And then I took up rowing. My motivation was to get a bit of exercise and to explore the bay from the water. It’s turned out to be much more than that. My first rows were to the Puntal – a beautiful place I usually avoided as there is no shade and I burn to a crisp in 15 minutes even with sunscreen. But when you row there and hop out for a swim…that’s a different story. 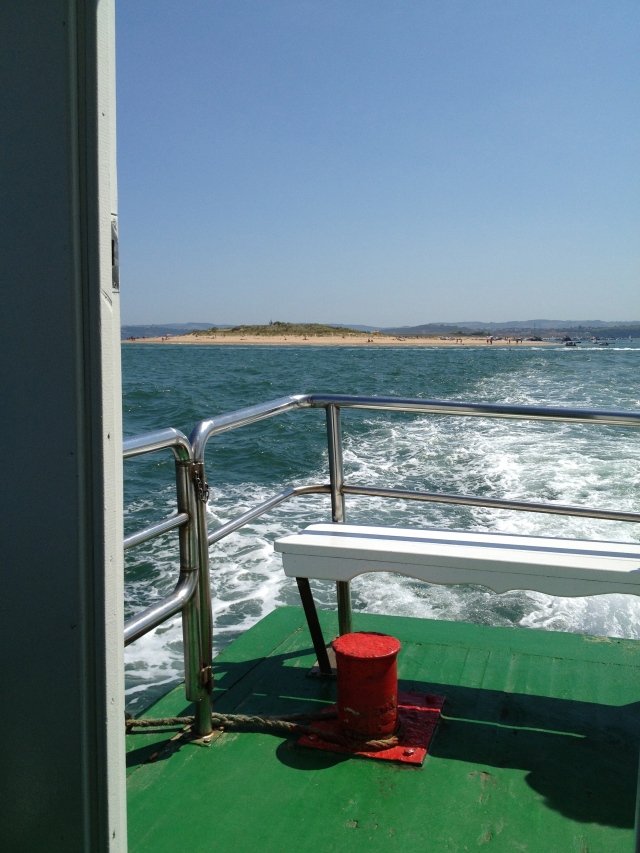 Most people take this  ‘lancha’ or ferryboat to the Puntal. I’ve taken it a few times with the kids to Treasure Island – as we now call the place. There’s no treasure and it’s not really an island but there is something special about it. I like this photo because it captures a sense of the mystery and adventure about going there 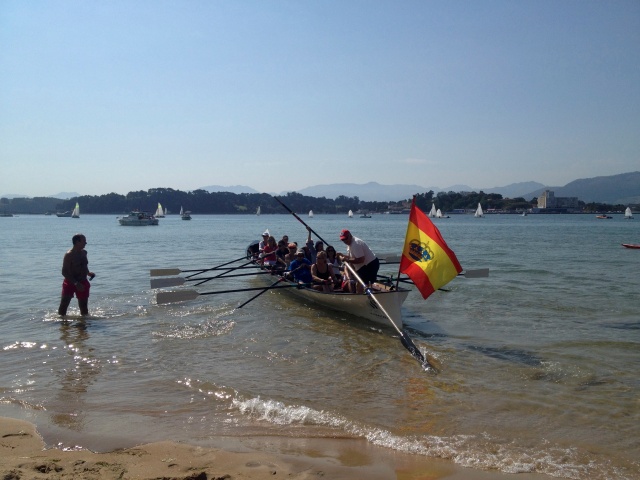 Here is the Santander en Boga sardine boat & crew arriving at the Puntal. This is one of the few photos I have of the guys from a distance because I’m usually in there in the thick of it. This photo not only reminds me of the great weather we had on my first rows, but of the amazing setting we have and of course, the great camaraderie between the rowers

Soon enough I was game to take on capturing a few events. Of course, because Santander is so small, one project always overlaps with another. 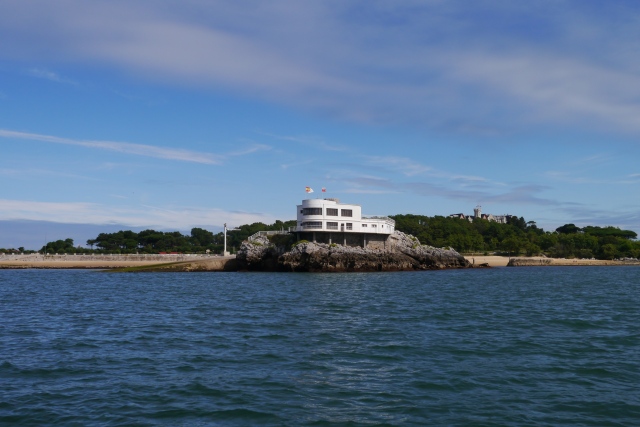 I love this building from every angle. I had already blogged about it when I took this shot from the water – this time. I like how you can just see the Magdalena Palace peeping out on the right…

I took the shot above while out on a press boat at the Sailing Trials in September. It was a great chance to road test my new photography skills and learn a few tricks from the pros. And when I saw their cameras and lenses I was impressed. And even more so when I saw their final images. Considering how new I was to the lark, I was pleased with the photos I took that day. 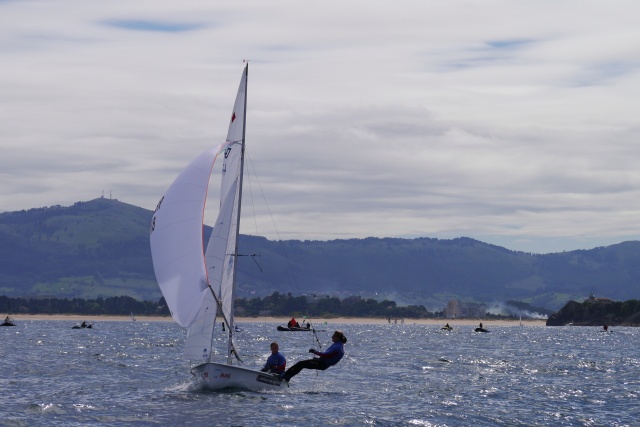 A couple of hundred photos down and I was really getting the hang of it. The pros were able to zoom in on the brand of sunglasses but I was happy to get this snap

One of my favourite photos of the year was a studied shot. I was getting interested in showing dark and light and I achieved a nice composition at a Classic Motorbike Race at the Magdalena Palace. I had been snapping happily for a few hours and had used up the two batteries on my decent camera and my own mobile phone battery had died so I had stopped taking pics. But when I saw the potential of this shot, I took my husband’s mobile. I was thrilled with it. 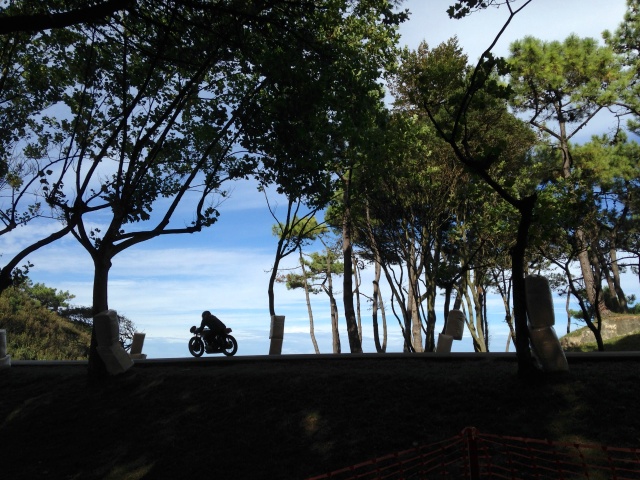 The bikes were going so fast it took about 25 takes to get one of a biker between the trees. It was all about gauging the speed of the approaching bike by listening to the sound of the engine as it circled around

Sometimes the pictures I like just remind me of a moment. This one was taken by a fellow attendee at a blogging event in Dublin called TBEX – a great conference attended by 700 travel bloggers. Ten out of ten to Guinness who did everything possible to facilitate a blog mention. Where else was I going to get a tutorial in pulling the perfect pint! 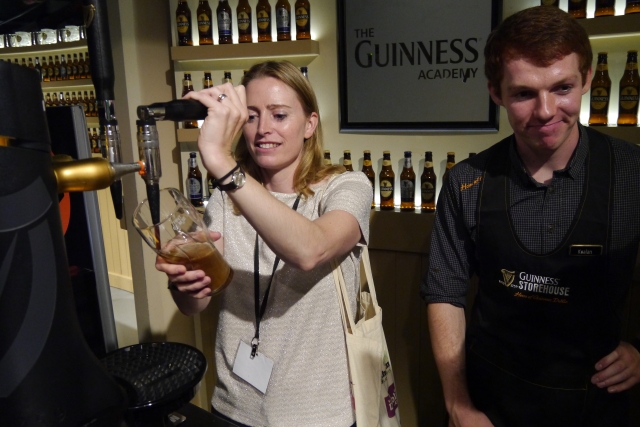 A masterclass in pulling a pint of plain. And if I don’t look local enough, my teacher does!

I really enjoyed being back in Dublin with a camera. I photographed open fires, stews, scones, fruit markets, Georgian doors, bikes, alleys where I lived and buildings where I worked. All great for many reasons but I’m going to share the photo of a house on Henrietta Street that was open to the public for Open House Dublin Weekend. It’s a fantastic concept and one I’d love to see happening in Santander. In terms of the photo, I love the light streaming in the windows. It’s a popular location for fashion shoots and I can see why. 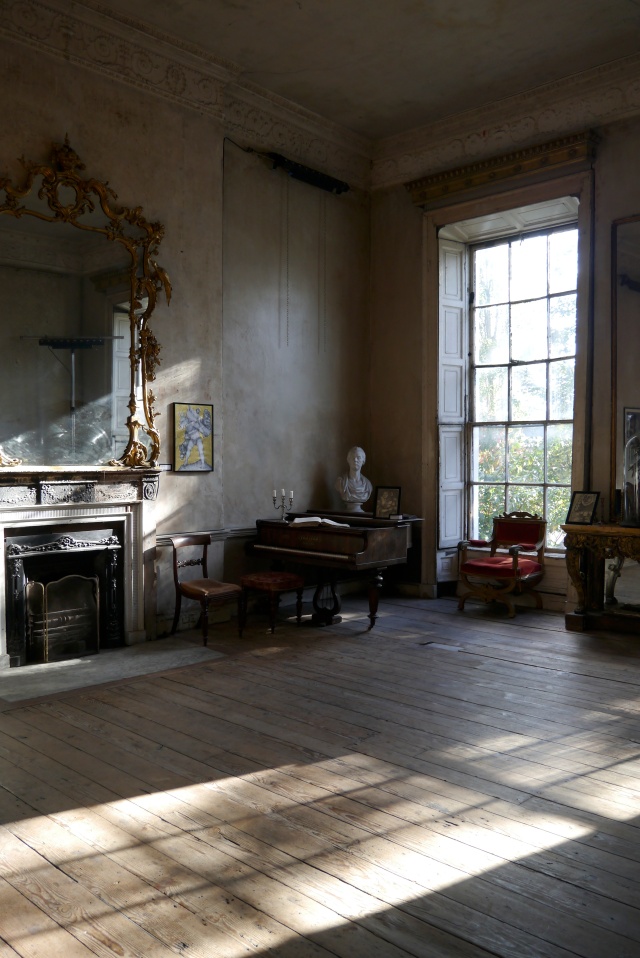 Henrietta Street in its original grandeur. If you are interested in social history, read about this street that fell from grace

Food took on a whole new meaning for me this year. Time was I cooked or ordered food and ate it. Not any more. If you see me today with a plate of food, a slice of tortilla or a cup of coffee, chances are I’ll already have snapped it. And if I haven’t, I know I’ll regret it. I like this one. I took about ten shots of the giant-paella and liked this one most. 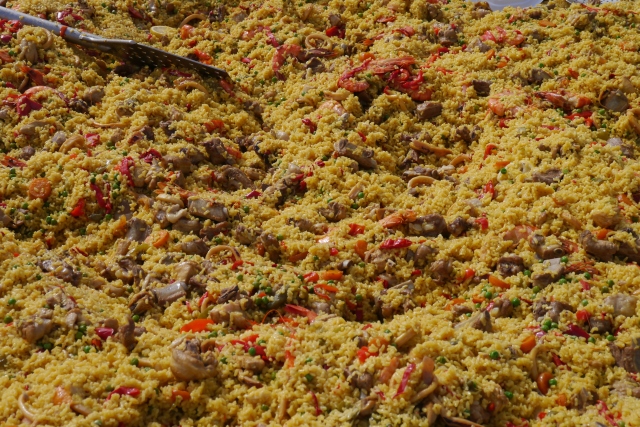 A zoom in on a paella cooked for five hundred people in Santander- and it was tasty!

The final photo of this year is taken at the regional web awards three weeks ago. I didn’t win an award but I had garnered a lot of public votes and thought I’d get a snap to remind me of how far I’d come in just a few months. I know something good will come of it… 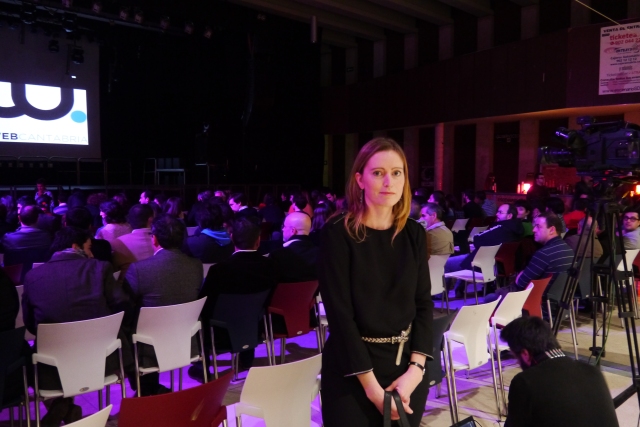 So that’s it. My year in pictures. All I need to do is devise a system for cataloguing them. But for now – thank you 2013. You’ve been interesting.