Llamas Park in Santander – A Breath of Fresh Air

Parks are complex elements of any city. Not only do they provide recreational space, they also define the shape and feel of a city and its neighbourhoods. The most famous park in Santander, Magdalena Park, was a royal residence one hundred years ago. There’s no denying that the royal connection gives it caché and the views of the bay are pretty amazing. But I find myself going more and more to Llamas Park – the city’s new modern park.

Do you want to see the new park?

Don’t expect any grand park gates. This building is your landmark for the park entrance. The stainless steel whale was built well in advance of the park back in 2003 and is used for big sporting and entertainment events. If you find this building, you are at the main park entrance 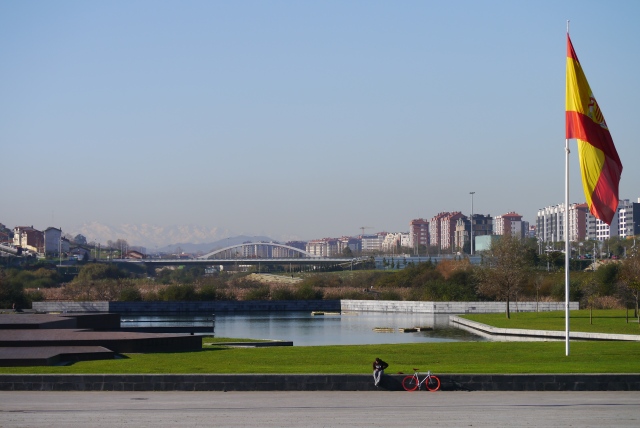 And this is Llamas Park – complete with the Spanish flag, red bike and snow on the Picos de Europa in the background

What does Llamas mean?

It’s pronounced Yamas and although the word usually means flames, it’s actually the Latin word ‘lama’ which means slough or bog that tells us a bit about the geography. The valley was a river basin that ran to the sea but when the Sardinero area was urbanised, this tidal flow was tubed underground. The 3km super-swamp became a no man’s land and was illegally used for the disposing of builders’ rubble and agricultural waste. 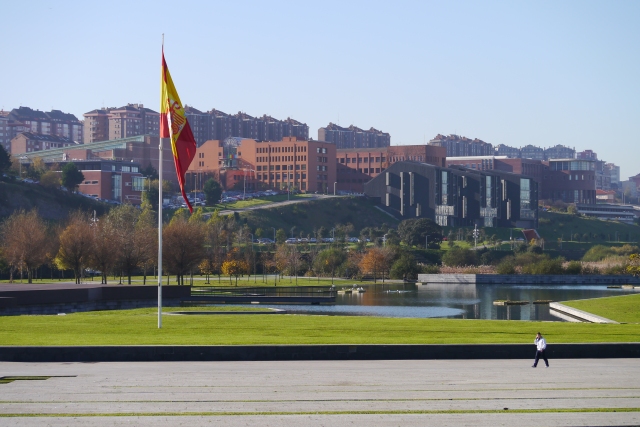 Once an eyesore, now an urban park with wildlife, lakes, playgrounds, bike paths, a café and restaurant, a rainy-day kids activity centre and a live-music venue

The Catalan architects Batlle i Roig were commissioned by the Town Hall to design the park. It was, and still is referred to as the Atlantic Park on the architects’ website. Their landscaping plans include an amphitheatre,  shallow lakes, water channels and plantation.

Very angular and urban lines although this is softening with time

Work began in May 2006 and the first phase – consisting of 184,173 m2 of parkland – was officially opened one year later. The second phase was opened 24 months later in May 2008 bringing the total area of the parkland to 309,173 m2. The café, restaurant and children’s activity centre opened in August 2008. And in 2011, the music venue and bridge were completed.

On an ecological level, there was significant campaigning before and again during the construction of the park by environmental groups that were unhappy with the design and the types of trees being planted. One of the groups called ARCA called for a wilder woodland of native trees that could follow the natural contours of the valley. Some amendments were made to the plans in response to the environmental lobbying and the administration upped its mix of native trees from 20 to 54 per cent.

And the timing of the park’s official launch was also the source of much debate locally. The Electoral Commission was called in to decide whether the park’s opening celebrations were being held too close to the elections in May 2007. Criticism centred on the fact that the park wasn’t actually 100% completed. The Electoral Commission found in favour of the Town Hall and allowed the launch festivities to continue.

The blend of natural and man-made materials contrast successfully. The lines are very clean

Many of the walkways are made from wood. The original planks warped badly and were replaced with this more robust decking-like paving

The terracing, which you can see here in the distance, has been a useful way to build and plant on the insides of the valleys

Although the design is very urban and angular, the growth is softening the look and feel of the park. Flora and fauna don’t really do 90-degree angles do they?

Oops – I squashed these a bit taking a photo

You can stare in at the waterfowl forever… 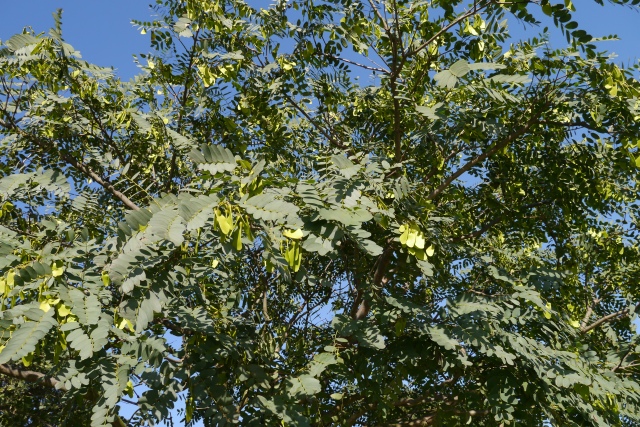 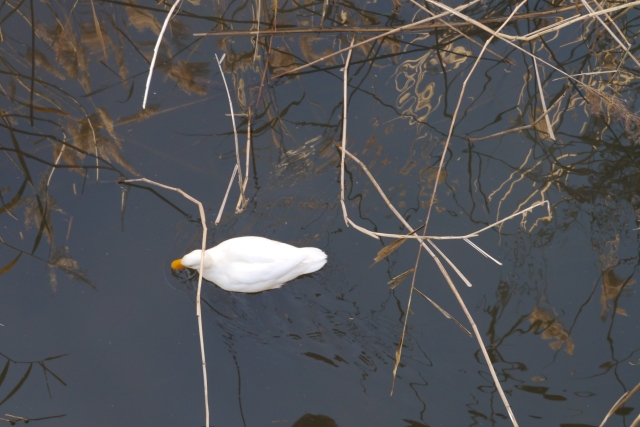 Everywhere you look there’s something flying, swimming or growing

Peering in is a popular activity

One Size Fits All

If you have a pair of roller-blades, skates or a bike, you’ll love the park’s 2.5km of bike lane. You can even hire a blue city bike at the park. Joggers, walkers and dog-walkers are also very happy here. And if you have a remote-controlled boat the shallow lakes are perfect – there are a few serious collectors who bring their boats and submarines out for a spin at the weekends. And, the reason that I usually go – the three playgrounds and café make it a perfect park for families with small kids. Pack some bread for the ducks and you’ll have guaranteed smiles. And, if none of the previous activities interest you – but- you enjoy urban architecture and landscaping, you’ll already have realised that this is the place for you. 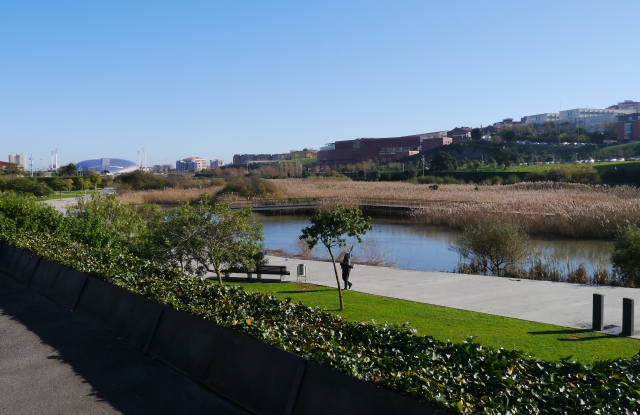 You never know who you’ll come across – the day I went a (good) bagpipe player was in action. He had me humming Christmas carols and Coldplay for the rest of the day

Markers from 5 & 10km charity runs that are held in the park. The space also hosts other charity fundraisers, environmental workshops and treasure hunts

Eerily quiet mid-week, this playground is where the city kids climb trees 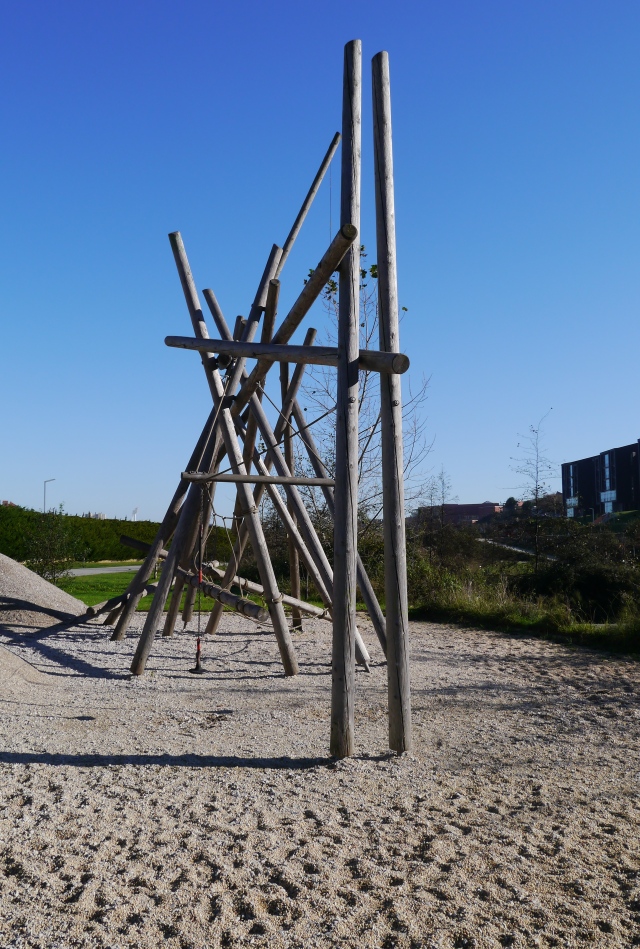 One of the newer climbing frames for older kids

The After Party – Escenario Santander

In 2010 the diggers were on site again, after a two-year break, this time for a live-music venue.

What’s inside? Recording studios, rehearsal spaces, music classes, and a stage for live-music, plus a base for a new contemporary choir and the municipal band. The design has made great use of its quirky site, nestled into the side of the valley. From one side, the venue seems to be bunker-like but as you walk around the site, you see it is completely exposed on the other side. Capilla Vallejo Architects designed the building  – you may be familiar with their Espacio Ricardo Lorenzo in the College of Architects building in Santander.

The venue was opened in March 2011 and has hosted many live gigs and the odd music festival too. It was originally run by the Town Hall but has since been outsourced on a two-year contract. While it’s had its teething problems, and its distance from the city’s bars and clubs has been the source of some criticism, the acoustics are considered to be excellent. I’ll be at an awards event there next week so I’ll get a chance to road test it from the inside. 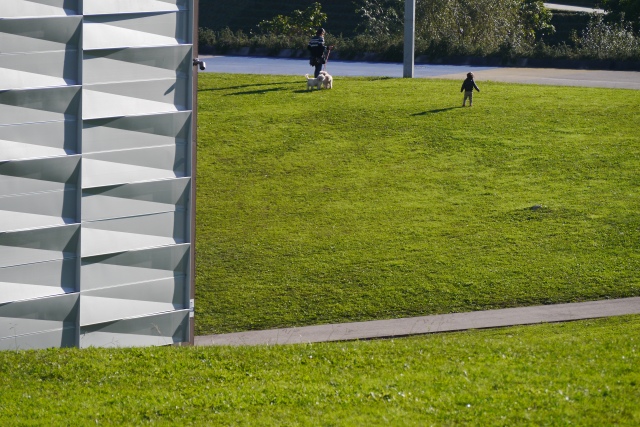 Unless the ducks complain about the racket, the bands shouldn’t have any concerns about noise pollution

And along came the bridge…
The bridge is named after Juan Jose Arenas – a civil engineer with a private practice in Santander and professor at the University of Cantabria. His firm designed this 102m x 24m bridge for pedestrians, bikes and vehicles. At its official opening in May 2011, the Mayor spoke of the bridge giving a hug to both sides of the city. As a out and out fan of curvy buildings, I do, of course, like the bridge  – especially the way it frames the edge of the park. Instead of the usual grey concrete, it’s made using white cement and other components such as whiter sand which is not just easy on the eye but makes the structure more visible at night and therefore more safe. It also reflects more light which can be beneficial to the structure in hot weather. I came across a Town Hall projection of 5 million vehicles per year crossing the bridge – which seemed high but that’s an average of 10 cars per minute which tallies with what I saw when I was there.

The bridge from up top is nice and curvy 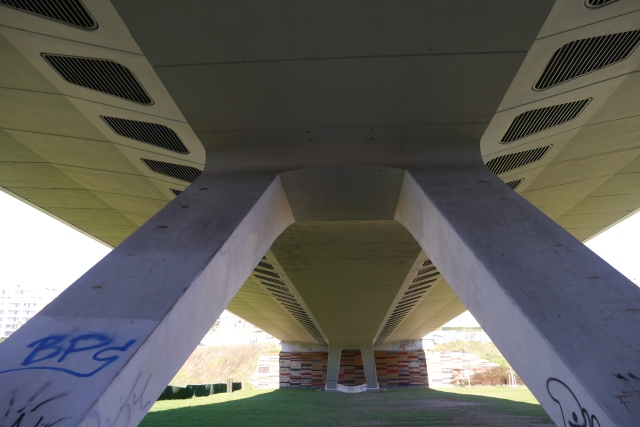 And feels a bit galactic underneath 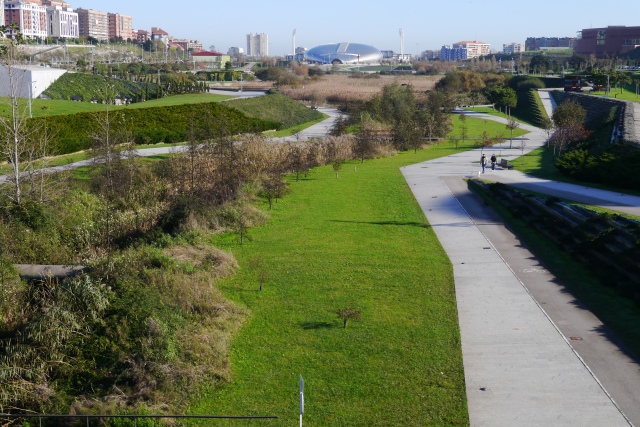 You get a nice overview of the park from the bridge 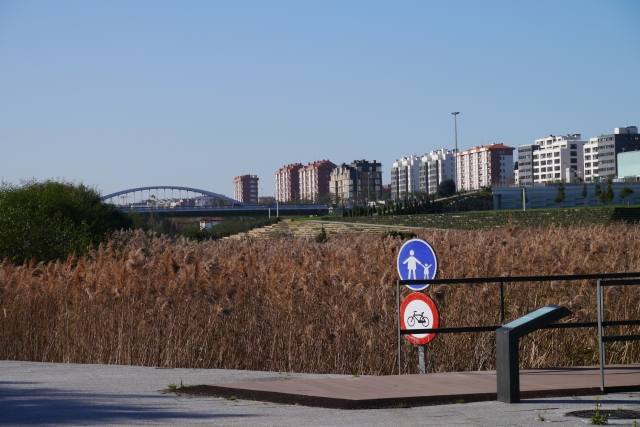 The bridge looking very attractive in the horizon

Somebody please stop me taking photos of this bridge…

And now the students…
The newest addition to the park are these three zinc-coated towers. Opened in November 2011, the blocks are the first college structures to face the Llamas Park. The buildings are a new base for student services, student societies, plus some meeting, conference and language training facilities, and a student canteen that looks out onto the park. Half of the site was donated to the university by the Town Hall, it already owned the other half. I must go back soon to check out the food and the views…

Am I the only one who thinks these look a bit like pixelated cacti plants?

So there you have it – Llamas Park. What do you make of this modern park? Would you recommend it?