One of my favourite places to spend some time and cash in Santander is the city’s main food market. For me, it’s a perfect blend of architecture, history, food & drink all rolled into one. It’s called Mercado de la Esperanza  – meaning Market of Hope – and is located immediately behind the town hall in the centre of the city so it’s very easy to find. It’s opening hours are 8am-2pm and 5pm-7.30pm. It’s shut on Sundays and don’t bother trying to buy fish on a Monday either. A real rookie error.

You know you’re near when you see the white vans pulling in and out and double parking when the cop on duty at the back of the town hall turns a blind eye. Don’t be distracted by what’s on sale outside under the canopies – which could be giant knickers or giant red peppers, depending on the day. That’s not the part I’m interested in. Make your way over to the main building…

This is it – Mercado or Market 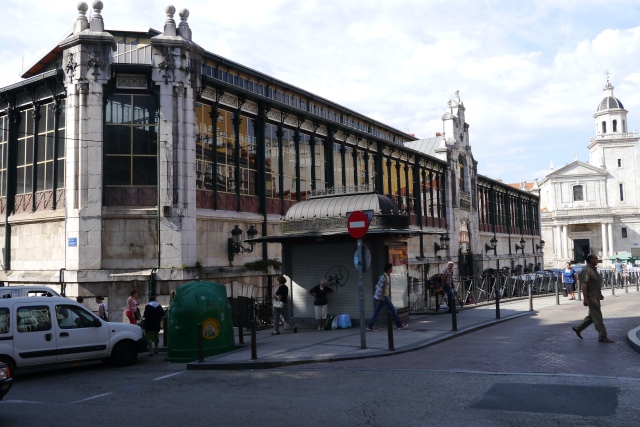 The view from behind. From this angle you can appreciate the size – it’s 71m x 25m 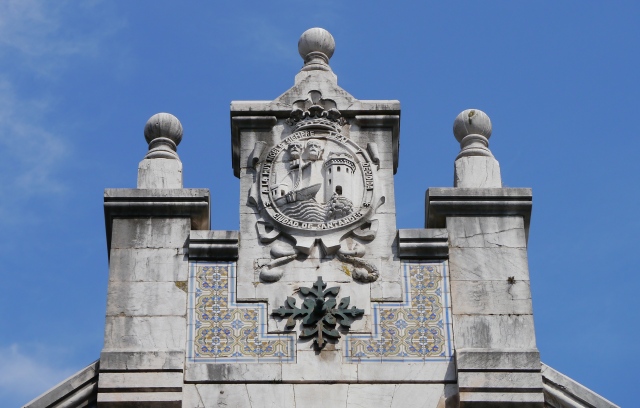 The market was designed in 1897 by two architects from Madrid – Eduardo Reynals y Toledo (1888-1916) and Juan Moya Idígoras (1867-1953). They were called up by municipal architect Valentín Ramón Lavín Casalís who was encharged with an ambitious Urban Development Plan to deal with the aftermath of the 1893 Machichaco fire. The architects were hugely influenced by modern materials such as iron and sheet glass that had been so successfully put to use in Les Halles Centrales market completed in 1866 in Paris. Unfortunately, the market which Emile Zola called the ‘belly of Paris’ was demolished in 1972.

Dozens of European cities were quick to follow the French lead and in the 1870s Madrid had kicked things off here by commissioning French architects to design two markets made from iron for the capital. The Plaza de la Cebada and the Mercado de los Mostenses markets were opened in 1875 and both were demolished, the first in 1956, the latter only lasting until 1925. Thankfully the Born market in Barcelona which was completed in 1878 still stands today but hasn’t operated as a market since 1971. At one time Valladolid had three iron markets – only one survives – the Del Val market which is just about to undergo a two-year renovation project.

So when Santander agreed the budget for a modern new market made from iron and glass, it certainly wasn’t breaking the mould. Manuals by French architects and engineers on the design and construction of markets had been translated into Spanish and local engineers had cut their teeth with these new materials on bridges, train stations and even lighthouses. The city of Santander assigned a generous section of the site formerly owned by the Franciscan order to house the new modern market and a new town hall. The market was opened to the public on 10 April 1904 and, unlike the fate of others, it is still trading today.

The project engineer for the market was Leonardo Corcho (1850-1921) – the son of an Italian foundry-worker, who married well and networked successfully. Before this project, he had negotiated significant naval commissions, was innovating in the lucrative health spa equipment market, and also developing industrial cooker units. [One of these would end up in the royal kitchens at the Magdalena Palace.] One year after the market was opened, Corcho was named president of Santander’s Chamber of Commerce, so he had been project-managing more than just the building. The family business is still alive today in the form of kitchen utilities manufacturer BSH Electrodomesticos (Bosch Siemens).

The market today is relatively unaltered from its original design. The windows were replaced in 1941 when the big fire (see my post on this event) took out the glass. The first significant refurbishment came in the 1970s when the roof was changed and the iron windows were replaced with aluminium. It was listed in 1977. In 2010, 325,000EUR was spent on zinc roofing and acoustic-proofing. 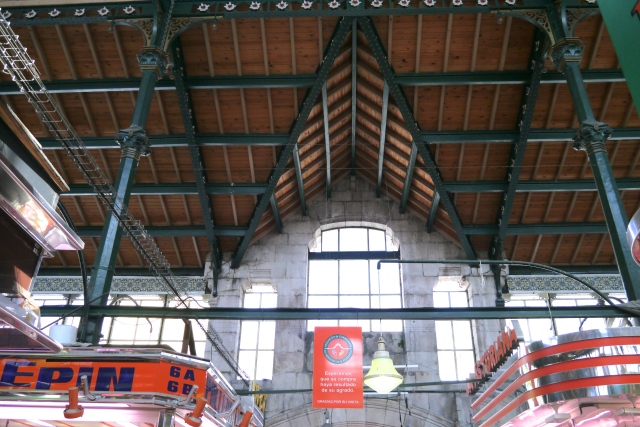 Inside, it’s even nicer 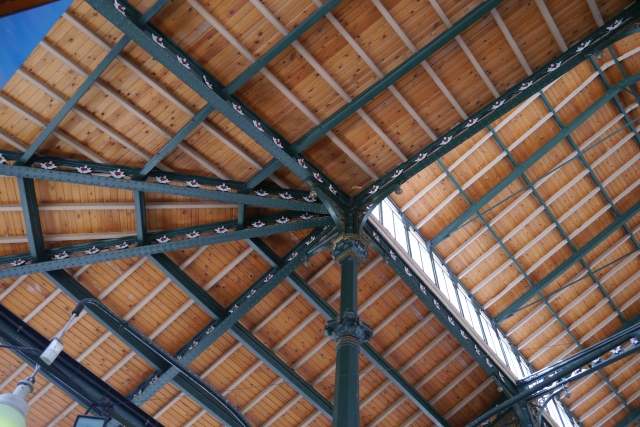 As with any market in Spain – and I’ve calculated more than 1,143 or so, the building is only half the charm. The traders and shoppers are what keep it alive (literally). Back in 1980, the traders formed an association to represent and promote the market’s interests and the work carries on today – whether it’s organising Christmas hampers, inviting poets and artists in to eulogise, and getting the city’s chefs to share tips and provide demos.

If you are able to visit, you might be surprised by the level of service when it comes to the product preparation – although I have to confess it’s pretty good across the city. You can expect to be asked when you’ll be eating the fruit you are purchasing so as to best select the level of ripeness. And whether you want that chicken breast prepared in strips for goujons or thin fillets to bread or char-grill. And the fishmonger will ask you whether you want the full hake prepared in cutlets for battering and shallow frying or just cleaned for roasting. Remember if you are asked whether you want the spine, head or tail for stock – always say ‘yes’ and throw it into the freezer for a rainy day.

Curiously there is no snobbery about what money you have to spend. In fact – the opposite. When I saw the chicken feet retailing at 1 euro per kilo I thought to myself – ‘that’s a sign of the times’. But I asked what you’d do with them – the trader told me they were absolutely delicious in a broth and went on to give me a few recipes. She was visibly disappointed when I went on to select a few of the more conventional items. Maybe I should give the legs a go.

If you walk around the space, you see a real mix of shoppers. For this reason – it’s a popular spot for politicians around election time. You’ll find quite a few of the little old ladies with the shopping-carts. (I keep threatening at home to get one of them!) You might see a local chef or two pop in. And you’ll see a decent scattering of the great and good of Santander as well. Plus a tourist or two. The traders are generally very tourist-friendly and encourage photo-taking, while recommending local products. Last time I was in I was recommended to try the ‘best buttery sponges you’ll find in all Cantabria’.

While some browse others are loyal to a single trader. Me? I browse… 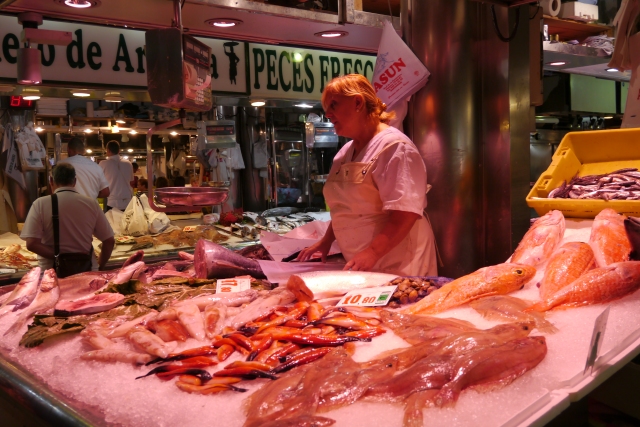 One of the many female fishmongers in the market

The market is the definitive place to shop for fish in the city. All the fins and gills you can imagine and lots more besides are located in the downstairs section of the market. At Christmas and for other special occasions, even the out-of-towners will come into ‘La Plaza’ to get the best prawns and the pricey ‘besugo’ or sea-bream. Eighty percent of all the fish sold at the market comes direct from Santander’s  ‘lonja’  – the wholesale fish docks where fish are taken from the boat, weighed and go to auction Dutch style – the prices start high and fall. So the fish is extremely fresh.

Squid and octopus are standard fare on your average Spanish table. The squid is going for 9.90 EUR/kilo

Known locally as bocartes, these anchovies are hugely popular in the North of Spain

We’re looking at the last week or so of the white tuna or ‘bonito’ from the North which can cost anything from 3.99 EUR/kilo to 20 or more. It’s good fried with onions, on the BBQ or in a fish stew

If you are looking for the butchers, the delis, fruit and veg, bread or pulses – you need to go upstairs. My favourite stand up on top is the olive stand. It’s only been open for five months but I think it’s a stayer. For 80 cents (1 US dollar or 65p) you can get a tapa on a skewer including a half gherkin, spring onion, slice of avocado, one whole anchovy, a slice of manchego cheese and a piece of jamon or a prawn. There is no way you could make this yourself for cheaper. I usually buy two and scoff them at home or in the office. 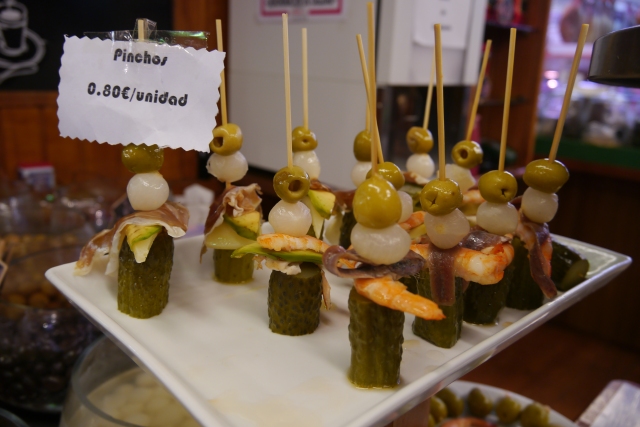 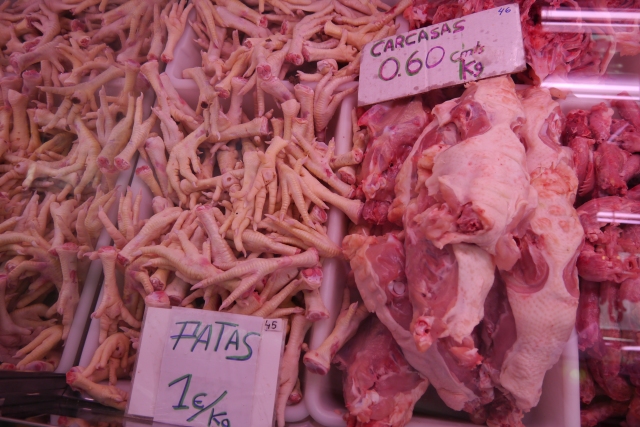 Bacalao or the salt-cod, very popular in Basque Country cuisine, is for sale along with other preserved items – upstairs

Is it for today? That’s what you’ll be asked when you say you want some peaches or nectarines

For a long time I was drawn by the variety and freshness of the fish and only went downstairs. I was also dreading what might be a stenchy meat section on top. But the pull of the cheeses on the top floor were hard to resist. And now I prefer to wander there because you get to admire the structure properly. (It’s kind of dark down in the fish section.) And of course, in case you needed another reason apart from the daylight – there is a bar up top – keen eyes will notice the photo of the Ciudad de Santander rowing team. [I will fill you in on this revived interest of mine sometime later this year.]

The tiny cafe/bar is upstairs 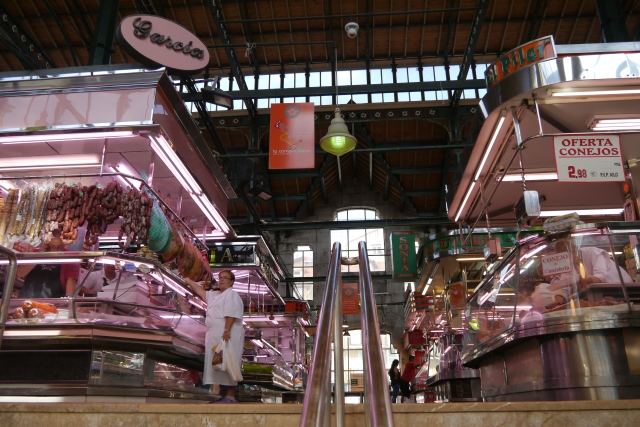 It’s lovely and bright up on top 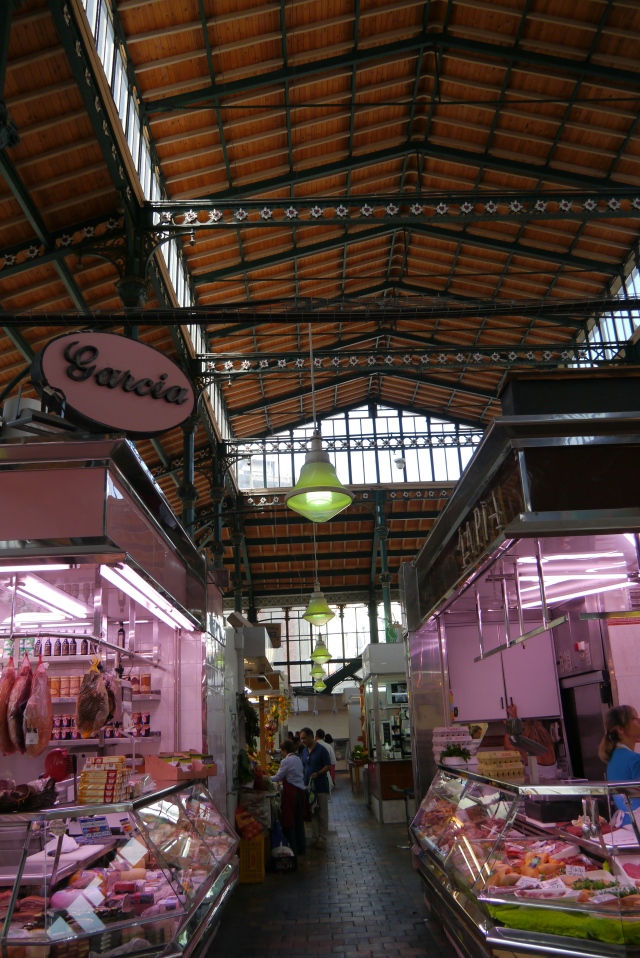 Well – now you know – if you are in Santander – make sure to call in to the market. Many of the stalls will vacuum pack items such as cheese and cured meats for travelling. And if you live here – did you realise that the market offers free home delivery if you spend over 30 EUR?

So never mind your Boqueria or your Mercado de San Anton. Come to this great market and see a bit of the real world…And if you wish to read more about Architecture and Iron Engineering in Spain, I recommend Pedro Navascues Palacio’s book which is written in English and Spanish.