Urban Spain and why I love living in Santander

So what’s it like – Santander? You’ve been there for a while. What’s it got going for itself?

My side of town in the sunshine

It’s hard to describe why I would choose to live on the seventh floor of a 1960s apartment block in a city of 180,000 people with my three small kids. But all it takes is a visit – on a sunny day – and there are plenty of these – equally spread across the four seasons.

In just one hour you will be won over – by the views from the port, the walks by the beaches and the many great cafes and bars. If you have a few days you can visit nearby villages and towns such as Comillas and Lierganes, and I suppose UNESCO-listed Santillana on a quiet day – and you will really understand why I am here. And if you ventured into the Picos de Europa – just two hours away by car. Well, enough said. 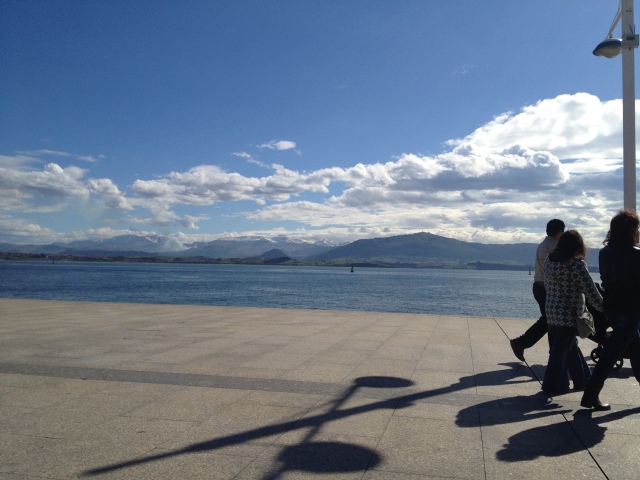 But holidays are holidays. What’s it like to actually live here rather than pass through? I have lived in three Spanish cities – and each at very different stages in my life so it’s hard to compare. The university city of Salamanca as a 19-year-old ERASMUS student is hard to beat. And Madrid was a fantastic capital to live in  – especially as I was really central and had no kids at the time so I could come and go as I pleased.

So how does Santander hold up? Very well. Santander is a great place to live. [Notice I didn’t say work – because that is the hardest aspect of living in this country – the jobless numbers tipped the 5m mark this year in Spain.] So if you are a student, don’t have to work, can telework abroad or are retired, it’s fantastic.

If I think about it – much of what I love about Santander is what I love about urban Spain. Forget the car – that’s something I use at the weekend. If I want fresh fruit or veg, I have about 10 places to go in a two block radius. If I need fish – I go to the fishmonger in the little supermarket below and have whatever I want filleted and boned from 9-2pm. If I’m making some meatballs and need freshly minced beef or pork – I have a butcher a minute away who can prepare whatever I want from 10am-8pm (admittedly with a three hour break in the middle of the day). And if I really want to push the boat out and get some unusual wine, exceptional bread or strange crustacean, it’s a few stops on the bus or a 15-minute walk into the centre that is full of owner-run specialist shops.

Calle Lope de Vega, Santander – all it needs is a tram and its a mini San Fran

But wouldn’t a garden be great with three small kids? True – I do think this from time to time – however I have three play areas within five minutes and some specular parks in the greater city area. And of course, there are the many sandy beaches within the city – where the local kids actually live from June to September. Some of them even have playgrounds as well. 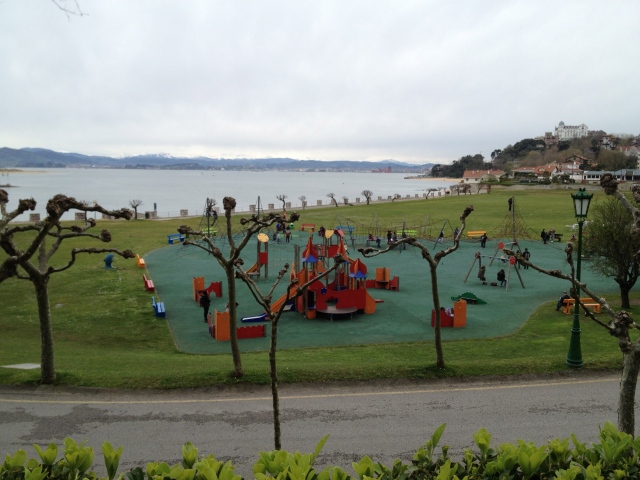 What’s the worst thing about this city? It’s a cruel criticism but the fact that it is surrounded by sea on three sides and to the rear by the mountains can leave me feeling a little hemmed in from time to time – even if it does create a spectacular backdrop. Although I have to add that since Ryanair swooped in a decade ago and started flying to London, Dublin and another 15 places or so, it’s been less of an issue.

My favourite season here is Winter. I love it when the Southern Wind  – or Viento Sur – is blowing strong. So strong in fact, that many businesses on the seafront close their front doors and send you around the back. This wind drives away all the clouds and offers spectacular views of the nearby mountain ranges. When I get a chance, I love walking along Reina Vitoria and uphill to the Palacio de la Magdalena and then down to the Sardinero beaches – those of you who run would enjoy that pleasure along this route as well.

Sardinero beach, Santander – I love walking on the empty beaches in Winter

Want to imagine what it’s like to live in my 1960s apartment?

My brother Paddy came over and tested his timelapse trickery in the neighbourhood. He filmed at night which is when I think anywhere urban looks its prettiest. Keep an eye out for the kid with the sparklers towards the end – I think I know him.

Did you grow up in the city or the countryside?

← Wherefores
The new Botin Centre in Santander – what’s it all about? →